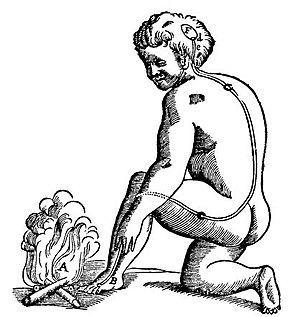 English: Illustration of the pain pathway in René Descartes’ Traite de l’homme (Treatise of Man) 1664. The long fiber running from the foot to the cavity in the head is pulled by the heat and releases a fluid that makes the muscles contract. (Photo credit: Wikipedia)

I was at a weekly Alexander Technique lesson, and the sun was streaming through the huge windows of the atelier, and my teacher and I were really shooting the breeze. More than usual. As I was floating up and down from the chair, concentrating on the use of myself, with the guidance of his of hands, I marveled at this scene and how it had become customary for me, and I started to ponder about how the Alexander Technique had come to be so integral to my life.

Here I am, a normally stressed out New Yorker, now with my jangly nervous system slowly but surely calming down. I guess most would say that NYC is a stressful place, but it is what I know and what I am used to. Born and bred, what can I say? It is certainly fast paced, the fastest paced. Great, great energy. The most amazing energy I know. And now, after an AT lesson, I just float out into that energy, refreshed and energized.

What finally led me to the Alexander Technique was abject pain in my neck. What had happened: it was found that I was walking around with severe and dangerous cervical spinal stenosis. I could have been paralyzed at the next possible fall. I had no symptoms whatsoever. The diagnosis was a total surprise. I underwent a laminoplasty: intense neurosurgery on my entire cervical spine. So I now have a fused cervical spine and nifty titanium hardware in my spinal column to keep it open permanently so that my spinal cord can never be crushed again. I have a fancy and mysterious long scar!  The surgery was a total success; however I had a long recuperation, and over two years of physical therapy could do nothing for that post-operative pain I found myself in. I lost an inch of height. My modest height of five feet shrank to four feet eleven inches.

Two surgeons and a flutist acquaintance of mine recommended Alexander Technique to me. So I started lessons in the fall of 2010.

My pain evaporated after about a month of lessons. A few months later, I regained my inch of height. Time and lessons went by. I wound up changing teachers. Ah…great fit! Great energy! More time and lessons went by. I wanted more and more lessons…and so to that end I decided that the best thing to do was to undergo the training to become an Alexander Technique teacher. While continuing private lessons, I started my training in the spring of 2013.

2 Responses to “My first post was supposed to be this…”