I recently came across this photo I took in the subway back in April. I remember being so struck at the scene of people waiting that I snapped a photo right before my train pulled into the station. Everyone was staring at their phones. Most of those folks were in variations of misuse as they bent toward their little screens. I was fascinated.

It used to be, in the pre-cell phone days, that when on the subway, riders would be reading newspapers. However, in this image, people were pulling down too, despite the larger size of the newspapers. I guess it is human nature to crane and move our heads toward objects rather than moving the objects to us. 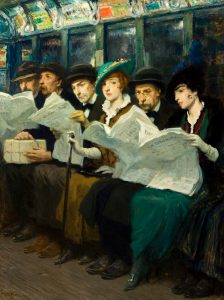 I suspect that the folks on the platform were totally unaware of their use or the implications thereof. A picture is worth a thousand words, right? Who needs some Alexander Technique lessons? We all do! Especially those of us who might be having neck pain. We all have lapses in consciousness, true. But being more aware more of the time is a great thing! Just saying.